Where: Institute of Aeronautics and Astronautics at TU Berlin, Marchstraße 12-14, 10587 Berlin

our next MeetUp will be about the work of Airbus and how their SAR Satellites create insights. With their TerraSAR Satellites Airbus has create the most accurate elevation model of the world. In the MeetUp Airbus will tell us everything about the satellites and upcoming products. We will discuss applications as well as the hardware of TerraSAR with Henning Schrader from Airbus. We will also have some free drinks for a networking session after the official presentation and Q&A.

We will also have a conference on the 27.04 here in Berlin. You can find all the information and tickets here: www.newspacevision.com
With the promo code „SpaceEnthusiast2018“ you get 25% off the limited ticket contingent.

WOW…What a start into 2018. ICEYE, the VC backed NewSpace StartUp from Finnland, just launched their next generation radar satellite on a PSLV into earth’s orbit and we have one of the limited interviews with them.

With their novel SAR technology, they want to change the earth observation market and are off for a good start. In November 2017 we had the chance to speak to Pekka Laurila, the Co-Founder and CFO of the company, about their business, technology and how they started. He also answers the question why they had to rent an icebreaker and a plane in the early days of their company! ICEYE is definitely one of the coolest European Space Startups. Learn how a few cool guys founded a company straight out of university, raised more than 20 million $ venture capital and launched cutting edge technology into space.
We hope you like it!

Please subscribe to our podcast and rate us on itunes. We are happy for your feedback on Twitter (twitter.com/newspacevision).

last week stakeholders, companies and visionaries from Europe met in Tallin at the European Space Week. A good insight into that conference provides copernicus.eu.
The Space Week included a hackathon, several gatherings, an information day on space-themed elements of the EU’s Horizon 2020 research and development programme, a space exhibition and the opening of ESA’s latest business incubator. In addition the finalists of the Copernicus Masters and European Satellite Navigation Competition were presented.
Here you can read a few quotes from Twitter which – in my opinion – accumulate the spirit of the European Space Week.

Sarah Cruddas (Space Journalist, Broadcaster and Author)
“So much has changed in the European space sector in the past few years. There are now more opportunities than ever!”
Dallas Kasabowski (Analyst, Market Research, and Consulting at Northern Sky Research)
“We need to put a lot more effort into informing the public about the benefits and opportunities of space. Outreach is key!”
Tytus Michalski (Managing Partner at Fresco Capital)
“You don’t need to be a billionaire any more to start your own space company. Space has become accessible to any entrepreneur.”
Jan Wörner (ESA Director)
“We have to be disruptive. We have to give young people the room to be disruptive if we want to improve our future.” 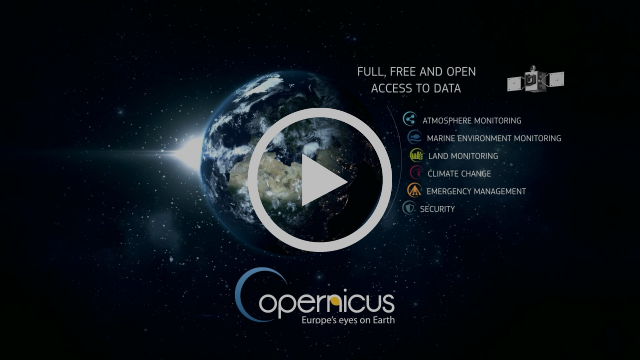 The ministers of the European Union and the European Space Agency statedthat ensuring a stable future for the Copernicus programme is also needed after 2020. 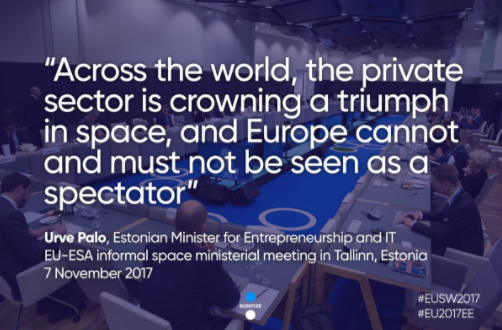 Our second podcast is out now! During the European Space Week in Tallinn Sven and Daniel had the pleasure to talk to Dallas Kasaboski, analyst at Northern Sky Research, and talked with him about e.g. the European New Space market, differences between the USA and Europe and the earth observation market. They have learned a lot and we are sure you will get some special insights from this episode! The podcast was recorded on the 9. November 2017.

As mentioned, a lot is happening in Europe’s space sector. Two weeks ago the Space Tech Expo took place in Bremen, last week there was the European Space Week gathering in Tallin and in this week the NewSpace Europe Conference will take place from 16.-17.11.2017 in Luxembourg.
Wow! That is a lot for Europe and more will come!

In addition we can announce a new NSV Event. We will chat with Sebastian Marcu, the Co-Founder of Bake in Space, on the 12. December 2017. Register for free on Meetup with this link.

Our second podcast is out now! During the European Space Week in Tallinn we had the pleasure to talk to Dallas Kasaboski analyst at Northern Sky Research and talked with him about e.g. the European New Space market, funding mentality, differences between the USA and Europe and the earth observation market. We learned a lot and are sure you will get some insights from this episode! The podcast was recorded on the 9th November in Estonia.

The NewSpaceVision Podcast series focus on entrepreneurship in the field of NewSpace in Europe and abroad!

We would love to hear your feedback via our social media channels or info@newspace.vision.

PS: We are always looking for interesting podcast guests!

Our Newsletter#6 with a summary of the European Space Week in Tallinn was published today. If you are interested in Albrechts biweekly Update about a specific NewSpace topic please sign-up below.

it´s Daniel here and I hope you all may love what I created within the last weeks. I created an awesome space songs playlist on Spotify which may inspire your work and may increase your productivity. Before you listen to the songs I want to show you why it does mean a lot to me and why space songs are awesome. With our young professional conference, we want to inspire more people to join space companies and startups in Europe. So, feel free to share this playlist to everyone who may be interested. This will attract more people to grow the industry. It is the inception method 😉 If you like what we are doing and if you love this playlist spend us one coffee or more via PayPal.

First of all, we are space enthusiasts. What does that mean? Space is not only our job, it is our passion since our childhood. We played a lot of space games, watched space movies, created awesome spaceships with LEGO and later studied space engineering or related topics. It´s true that I was Mr. Spock on carnival in Düsseldorf with Spocks ears, my own communicator and phaser. When your job is your passion and music is your passion than both things come together. I´m open for all music genres so you will find classic and Hip-Hop as well as Rock and various Electronic styles. I bet there a more songs you love than songs you don´t like. So just skip songs that may disrupt your inner balance. When I must deliver a lot of output I often hear one song on repeat to reach a mental state of holistic focus on the work. A lot high class performer discussed this topic (read here). You will find a lot of songs you can hear thousands of times in the playlist. I checked it 😉

Let me tell you a bit about some songs in the playlist:

When we go back to the first space age a lot of artists started creating awesome songs such as „space oddity (1969) in the year of the moon landing. And of course, you will find the theme song of star treks original series which started in 1966 and inspired generations of young engineers to work in the space industry. Seven years after the last man Eugene Cernan walked on the moon the song „Walking on the moon (1979)“ was published and now exists in a variety of versions. Another song I added is from Star Wars. I tell you it is a funny and awesome feeling when you are in the supermarket and the Star Wars imperial march starts playing in your headphones. But there are some funny songs in the list, too. If you want someone to learn the solar system in a funny way, just play „solar system (1977)“ by the beach boys.

We are talking a lot about asteroid mining today and already landed Philae after a long journey with Rosetta on comet Churyumov-Gerasimenko. One movie which climax was landing on an asteroid to save humanity was Armageddon by Michael Bay in 1998. I added two songs of this movie which are „Leaving on a jet plane (1969)“ and of course „I don´t want to miss a thing“ which was the theme song of this movie. One year before Armageddon was in cinemas the prodigy published the song „Firestarter“ which is the perfect song for every rocket scientist (yes, the video is kind of crazy). One song I also really love while coding or engineering is „Out of space“ from the prodigy which was published in 1992 but sounds like it was just published. Yes, this video is also kind of crazy but there are rockets and a moon launch of Apollo in it.

Other songs you can find are „I´d love to change the world (2014)“ from the Star Trek Discovery Trailer or the well-known electro song „Sternenkinder (2011)“.

I also added a lot of songs published within the last months and years and added a few original NASA audios to the playlist. I´ll add new songs regularly. Of course, you can send us songs we should add by sending us an E-Mail to Daniel@newspace.Vision or by writing a comment here on the website. So, if you cannot wait just visit our playlist and do not forget to follow it on Spotify:

Do You Like NewSpaceVision and the playlist? Buy us a Coffee. ☕