there are many congresses out there which belong to the space topic (actually we should work out an overview someday). The reason why I focus on the IAC is that some very interesting announcements and cooperation declarations were made at the world’s largest gathering of space people. Big and small player sat together to form the future of space exploration …
Michelle, founder of HigherOrbits, captured it for us. 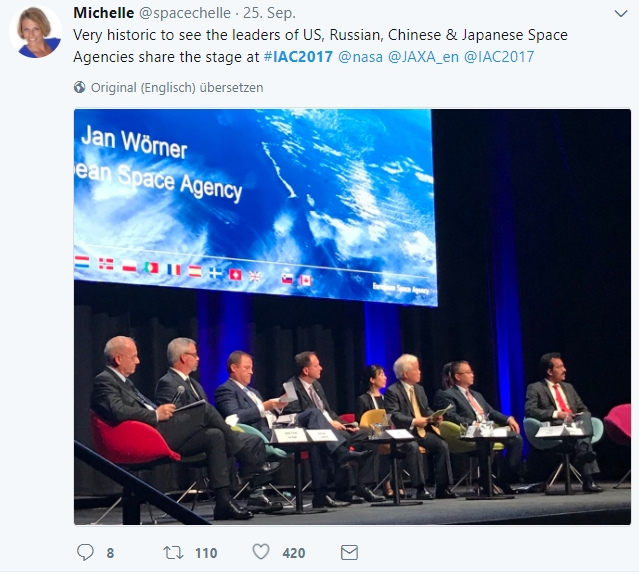 If you want to have a student’s perspective on the congress check out the Blogposts from BlueSat Members.

At the IAC 2017 opening ceremony Sen. Simon Birmingham, minister of education in Australia, stated  that Australia will establish a national space agency.
The Guardian is wondering what the Australian Space Agency is doing in the near future.
And a lot of people were asking what the name could be. And no, oficially the agency is not called ARSE.

At the IAC 2016 Elon Musk revealed his Mars Colonization Plan and was then criticised by some experts. One of them is Robert Zubrin who wrote a long article about his point of view and also gives some advice on how to do it better.
This time Musk updated his plan to get to Mars and how to colonize it. Moreover he presented a plan for short duration travel on earth with the Big Fucking Rocket (BFR) which should fly to Mars as well. This announcement has triggered an ongoing discussion. Some of them you can find here:

First expert reaction: Space.com
Focusing on the business plan: The Verge
When historians look back: Next Big Future
For sure we will see further reaction in the coming days which dive deeper into the topic.

Lockheed Martin updated their vision for Mars Base Camp. After Orions missions EM-1, EM-2 and the Deep Space Gateway the Mars Base Camp with lander, is the next step. Their video describes the vision very well and clear. Here you can see the complete conference presentation.
In this presentation the Berlin based Part Time Scientists were mentioned and a picture of their rover had been shown to tell us how commercialisation of space could work. Congrats to PTS on that way!

While I checked the IAC 2017 Main Programme and was searching for the term „NewSpace“ I stumbled upon Narayan Prasad Nagendra. He is, amongst other positions, the curator of New Space India. If you would like to know how the India NewSpace eco system looks like and how to foster it check out the newest article from NewSpace India. Maybe we can establish a few ideas in Europe as well.

I was a bit shocked when I realized that the last newsletter I published is four weeks ago. I feel a bit sorry for delaying this newsletter but I think I have a good excuse for that. I had to organize the arrival of our newborn earthling :).

While I am having a look into the IAC 2018 Program, the congress will be held in Bremen, Germany, I say:
See you in the next newsletter :).